And we're on the move again!

This year VAPoR, together with MeSH, participates in the combined MMAMA - ISRU field testing campaign, again at Mauna Kea Hawai'i.

NASA's ISRU (In Situ Resource Utilization) campaign this year focuses around RESOLVE, and takes place in the same valley as the 2010 ILSO-ISRU campaign.

Besides this campaign, NASA has funded a number of instruments to participate in field tests under the MMAMA (Moon and Mars Analog Mission Activities) program. This is the program VAPoR participates in.

The campaign consist of small rover (Juno), a Mössbauer (or rather the Mössbauer) spectrometer, a ground penetrating radar, a sample preparation instrument, MeSH, and  VAPoR. We will, however, go to a different site, a bit higher op the volcano, called Apollo Valley. This site is geologically more interesting than the other site and there serves our purpose better.

First a short note on why we are doing this again and why here:

In general:
1. in order to fly a mission to another planet, you have to train train train, and make sure that you've simulated all scenarios that can potentially occur, so the only thing new in the actual mission is the cool stuff you discover, and not the instrument operation or people interaction
2. volcanos and deserts are more like the moon or Mars than any other place on Earth, because of their low amount of vegetation and water.

This site
3. Apollo Valley is a geologically interesting site of which not every detail is known yet, so even though the aim is not to do cool new science, we may find some new things
4. the sites is very accessible for logistic purposes (if there's no proper road, you won't be able to haul out all the equipment you plan on testing)

The first two days for us are setup and test days and on day 3 the real fun starts. So, today we spent acclimatizing, unpacking our crates, putting our stuff together, and scratching our heads about to random things that all of a sudden refuse to work. One of the problems is most likely a leak.. so more testing tomorrow. The other is that the software does not want to talk to the temperature controller. Considering the fact that the idea behind VAPoR is to controlled raise the temperature and measure the released gases, this is an interesting situation.

The VAPoR/MeSH team this year consists of Charles Malespin and Magnus Hedlund from HoneyBee Robotics, who built MeSH. Field work will be a bit of an overstatement this year, since we are operating from the gym at the observers's lodges at Hale Pohaku, where we will analyze samples brought to us, instead of us going into the field. 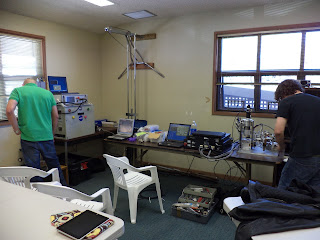 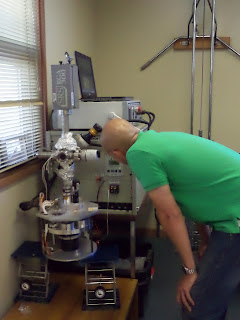 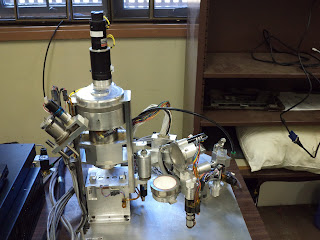 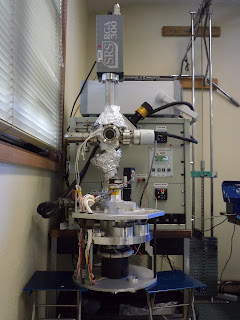 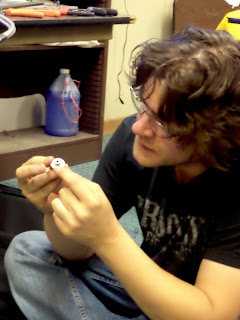